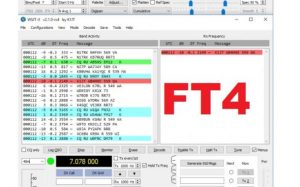 A new, speedier, more contest-friendly digital mode is just days away in beta version. WSJT-X Developers say serious work on the new FT4 protocol began shortly after the FT8 Roundup held last December 1 – 2. The goal was a mode that could compete with RTTY contesting in terms of contact rates, while preserving many of the benefits of FT8.

“Over the past month a small group of volunteers have been conducting on-the-air tests of FT4,” the WSJT-X Development Group — Joe Taylor, K1JT; Steve Franke, K9AN; and Bill Somerville, G4WJ — announced this week. “The early tests were very successful and helped us to make a number of important design decisions. We believe FT4 has considerable promise for its intended purpose.”

The developers say FT-4 soon will be ready for testing by a larger group and they’re seeking interested participants who can offer their “considered feedback.” They suggest reading The FT4 Protocol for Digital Contesting first.

According to the document FT4 is an experimental digital mode designed specifically for radio contesting that — like FT8 — uses fixed-length transmissions, structured messages with formats optimized for minimal contacts, and strong forward-error correction. Transmit-receive sequences are 6 seconds, making it 2.5 times faster than FT8 and about the same speed as conventional RTTY for radio contesting. FT4 can work with signals 10 dB weaker what would be required to decode RTTY while using much less bandwidth.

Transmissions last for 4.48 seconds, compared to 12.64 seconds for FT8. Modulation uses four-tone frequency-shift keying at approximately 23.4 baud, with tones separated by the baud rate. The occupied bandwidth is 90 Hz.